Located in the Archeology Park in the North-weatern corner of the city of Paphos, Cyprus is a burial site named the Tombs of the Kings. Though the name implies the site houses kings of old, this is inacurate. The site was given the name “Kings” due to the richly decorated tombs, not the people in them.

The Tombs of Kings is a lavish Hellenistic necropolis assumed to be the burial site of Paphitic aristocrats and high officials. It was constructed between 300BC – 201BC and continued to be used during the Roman period up until the 4th century.

The tombs were carved directly into the  stone, featuring an Macedonian* architectural style, not that of the local people. This can be seen in the large size of the graves, some tombs resembling houses more than a burial site, along with the fine detail, including Doric columns, frescos (most of which have been destroyed), and rich stone carvings that adorn the individual buildings and graves.

There are eight well preserved tombs, along with outlines and pieces of other structures. It is possible to walk inside the tombs and take in the history first hand. The most impressive of the tombs is Number 3, offering a large open courtyard, supported by a rectangle of Doric columns with burial sites along the walls and in surrounding chambers. There is a large wooden staircase that leads down into this tomb for easy access.

Following the belief that it was more important to build temples in death than for the living, the tombs are grand. This displays the ancient belief in the celebration of death and the coming of the after life that is shared by both the  Macedonian and Egyptian cultures*2.

Though site of these tombs has been commonly known and explored for centuries. The first through archeological excavation was lead in the late 1970s and the 1980s under the direction of Dr Sophocles Hadjisavvas, now Director of Antiquities of the Republic of Cyprus. 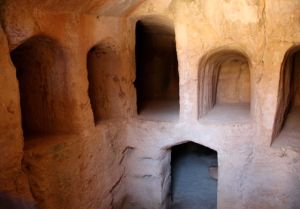 * The Macedonian people were a tribe and kingdom orginating from the northeastern Greek peninsula. They are not to be confused with the ancient Greeks, though the Greeks and Macedonian people share many religious beliefs, including the worship of Olympian gods.

The Ptolemaic people originated from Macedonia and reigned over the island during the Ptolemaic period, also known as the Hellenistic period. The Ptolemaic Kingdom was ruled by Ptolemy I Soter, following the death of Alexander the Great, and included the territories of Greece, Cyprus, and Egypt. Ptolemy I Soter rose to power as a Macedonian general within Alexander’s army.

*2  In 322 BC Alexander the Great invaded Egypt, creating a unified territory that included both Greece and Egypt. Therefore the architectural evidence of the Tombs of Kings shows both Macedonian and Egyptian influences, due to their shared history at this time. 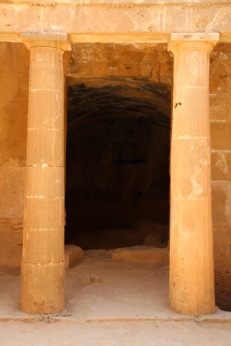