An easy morning or afternoon trail, Nehal Sefunim, leads past the abandoned quarries in the valley to a medium-sized cave (Sefunim cave). The cave itself has a large foray, with a smaller “room” towards the back. The further back you go, the more loudly you can hear the bat cries. The bats, themselves, hang from the ceiling with random bursts of movement and flight. The caves also have large stalagmite structures. After exiting the cave, you can continue along the trail to Megedim Cliff, which offers an overlook of the Mediterranean Sea.

Season: This hike can be done year round.

Reminder: Bring a flashlight for the cave!

Driving Direction: Turn from Route 4 at Beit Oren Junction and continue about 3 km [1.86 miles] north, until seeing between the 193rd and 194th kilometer stones a directing sign to the beginning of Sefunim Stream trail.
Park your car in place at the small parking lot or in the kibbutz across the road.

Trail: 4km, It is not particularly difficult. Taking no more than 3 to 4 hours if hiked slow, and is a perfect trail to do with children.

Take the red marked path that intersects with Route 4.

The beginning of the trail has you hike through a banana plantation before coming to the valley. Continue on the red trail, past the abandoned quarries. You can still see the minerals and stratification within the rock.

The trail will bring you up a slight hill to the Sefunim Cave. The surrounding area and hills are lush green in the springtime, offering an array of herbs and flowers.

The cave itself has a large foray, with a smaller “room” towards the back. 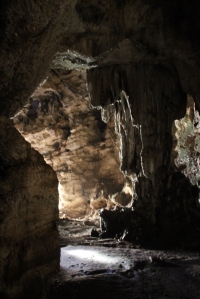 The further back you go, the more loudly you can hear the bat cries. The bats, themselves, hang from the ceiling with random bursts of movement and flight. The caves also have large stalagmite structures.

After exiting the cave, walk another 100 meters and take the blue trail. The trail wraps around the ridge, where there is a slight incline up Megedim Cliff. This brings you to a view of Mediterranean Sea.
Keep an eye out for wildlife, including hawks and lizards.

A view from Megedim Cliff

Up the hill and towards the viewpoint of Med.

Soaring through the sky 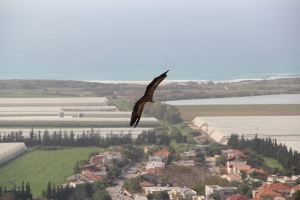 And over the fields

The blue trail will end up meeting back up with the banana fields, and follow the red trail out.