Don’t get too excited, seeing red hot flowing lava is a pretty rare sight to see even in Hawaii. BUT, what you can see, and much easier, is from the Jaggar Museum at Hawai’I Volcanoes National Park, you can see the glow from a lava lake inside of Halemaʻumaʻu Crater. Clear nights are the best for this, because what you are seeing is the reflection of the lava lake onto the clouds, not an actual glow from this. And if it is clear out, I have been there some nights where the stars are even more amazing than the glow. During the day while you wait for nightfall, take a drive down Chain of Craters Road, stop at Pu’u Loa Petroglyphs trail (about a 40 minute drive), and do a 1.5 mile round trip hike to see some ancient rock etchings. Still today some Native Hawaiians use these ground for rituals. Once you are back, continue the rest of the way down road, and park. If you walk half a mile farther (on the road, but its closed to cars) you can see where lava flowed over the road in 2003. 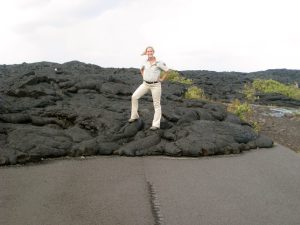 Also while you are at Hawai’i Volcanoes, it is a MUST to hike Kīlauea Iki, a 4 mile, 2 hour, loop trail that takes you through the site of the famous 1959 eruption. This is my favorite hike because it takes you through some beautiful rainforest, as well as the harsh lava landscape that Hawai’i has. The history of the eruption, which actually had 17 separate eruptive events, is also pretty spectacular, so grab a trail guide or tag along with a ranger to hear more about it. There are some pretty cool lava features to be pointed out, bathtub rings, a giant cinder cone, and even steam coming up through cracks in the ground as the lava at the center of it is still cooling over 50 years later! Part of the trail passes the Thurston Lava Tube, so add on that quick quarter mile loop before continuing on the trail.

The Green Sand Beach was probably my favorite thing in Hawai’i. It is not too easy to get to, but its more than worth the effort. Once you are there, you are really in a parking lot about 2 miles from the actual beach. The beach is only accessible by hiking or with 4 wheel drive. Locals will be hanging out in the parking lot offering you a ride there for a fee, or you can do the hike in, which takes about an hour. Not my favorite hike, but you are right along the ocean and when you get to the beach, it sure is worth it! The green sand is actually Olivine crystal, which came from past volcanic eruptions. The water at this beach is also unbelievably turquoise.

Just like green sand, black sand beaches are a Hawaiian specialty. The black sand is actually little bits of lava that was formed when a hot (2000 degrees Fahrenheit HOT) lava flow hit the water and exploded because of the temperature difference. Unlike the green sand though, black sand is really course, so not so great to walk around barefoot on. Punalu’u beach is not only famous for its black sand, but it is also known to have lots of sea turtles hanging around on its shores. Try and spot one, sometimes it just looks like a rock out in the water, but look a little closer and it might be alive.

This historic site, also known as the City of Refuge, gives a great look into some Hawaiian history and culture. There are some pretty cool totem poles around a Hawaiian temple, some of which have artfully crafter rear ends. This is also an amazing place to watch the sunset, lined with palm trees. If you are interested in marine life, the beach right next to this site is called “Two Step” and is a favorite for good snorkeling.

This small historic site is a quick stop along your way but has some great Hawaiian history attached to it. Heiau means temple in Hawaiian, and this Heiau is one of the largest found in Hawaii. The temple was built for Kamehameha I, the Hawaiian king who unified all of the islands. It used a certain type of lava rock, found on another side of the island, which was transported to this site by using a human chain, as the lava rocks could not touch the ground before they were places in the temple. Also close by to this site is Hapuna Beach, famous for having near-white sand. If you are picturing your perfect Hawaiian beach, Hapuna is it.

Microbreweries have started to take off in Hawaii, the largest of which is Kona Brewery. I recommend trying their sampler, or getting on a brewery tour which they offer daily. On the tour they let you taste beers that are not on the menu, or ones that the staff has made up themselves. My two favorites are the Black Sand Porter (dark and delicious) and Wailua Wheat (light and fruity).

The oldest volcano on the island of Hawai’i, and because of that it has started to erode back into the sea. There are seven deep valleys off the coast of Kohala, and they have some stunning views and beaches. Waipio Valley is the furthest east, and Pololu Valley is the furthest west, thereby being the most accessible. You can start from one valley and hike into another, but beware, they are very, very steep. Waipio Valley is accessible by 4 wheel drive, but it is known for being the steepest paved road in America. Hiking down is not so bad, but it gets to be brutal on the way back up. Pololu Valley is not quite as tall or steep, and is easier to hike into, although it is not accessible by car. Even if you do not want to do the killer hike down, the views from the top of the valley are breathtaking. This picture is at the top of Waipio Valley.

I never got the chance to do this while I was living there, and I am still bummed about it. They have some amazing telescopes up there, and at 14,000 feet above sea level, you are as close to the stars as you are ever going to get. Bring warm clothes though, it gets chilly that high up!

10. Akaka Falls Not absolutely a must-see, but definitely worth it if you have the time. Akaka Falls State Park is off of Highway 19 about 11 miles north of Hilo. The falls are 422 feet tall, and is just one single-drop waterfall. The trail is a little under a mile round trip, and takes less than an hour.

1. Kipukapuaulu a nice short hike through an old growth forest within the park. Kipuka means that it is a higher ground, so lava flowed around the area, never destroying the ancient trees sitting on top of it. Take Mauna Loa Road to the right off of the highway, you do not need to go into the park entrance to get there. All of Mauna Loa Road is great to stroll around in, and is prime location for bird watching. The rare I’iwi birds can be seen occasionally about 12 miles up Mauna Loa Road, once the elevation gets to be above 6,000 feet.

2. If you are in for a long, all day hike, try hiking out to Napau Crater. 7 miles each way makes for a rough 14 miles, but there is very little elevation change along the way. About the first 5 miles are across lava landscape until you get to Makaopuhi Crater. The two miles left until Napau Crater are forested, and you pass an old Pulu factory along the way (Pulu is the furry stuff from Hapu’u tree ferns, and used to be used to stuff mattresses during the American Civil War while there was a shortage of cotton). Once you reach Napau Crater, you will have a view of the gas plume of Pu’u O’o in the distance. Pu’u O’o is where one of the two simultaneous eruptions of Kilauea is occurring. Don’t try to hike off trail to Pu’u O’o though. That area was closed to visitors because it is famous for collapsing.

3. If anyone is interested in a backcountry overnight hike, Halape is a must. It’s a rough hike down to the coast, and you have to climb that elevation on the way back up, but if you make it, you will have a great beach essentially to yourselves. The campsite is 7.7 miles from the closest trailhead (Keauhou trail), and you must register with the backcountry office before you go.